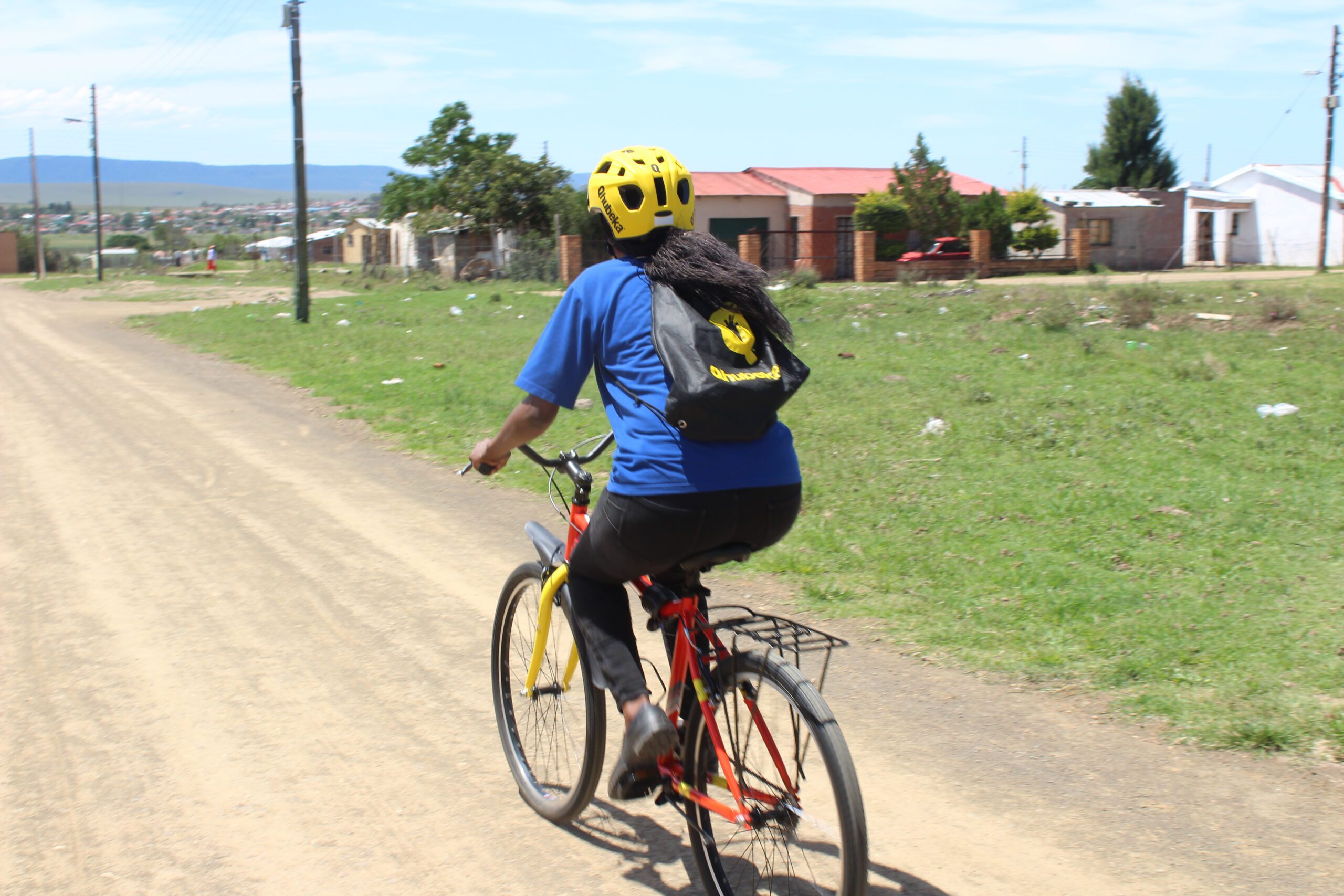 The Informal Settlements Programme (IS) provides the comprehensive prevention package (CPP), including TB screening and testing, HIV testing and counselling and STI screening, to contacts of TB cases and community members in three informal settlements in the Eastern Cape: Dimbaza, Duncan Village and Reeston.

TB HIV Care, in partnership with the Pedal Power Association (PPA), is piloting a bicycle project in Dimbaza Informal Settlement (Buffalo City Metropolitan Municipality). The PPA donated three  bicycles to carry out the pilot project, with hopes of expanding the programme should it prove to be a success. TB HIV Care is hoping that the introduction of bicycles will make a significant difference in increasing  the number of households reached and assist with the distance that HAST Counsellors can cover (in order to reach far-flung households).

The idea was initiated when the IS Programme received funding from dhk thinkspace to allocate to an area described as a ‘limited services area’ – such as Dimbaza. TB HIV Care used these funds to purchase suitable walking shoes for the team (who often walk great distances), and will also support the bicycle project with accessories needed for safety.

The bike handover ceremony took place at Dimbaza Community Health Centre on Friday, 08 February 2019. The event went extremely well, with TB HIV Care staff, Dimbaza CHC staff and community members overjoyed and excited about the project. What excites them most is that Dimbaza CHC is the first facility in the Eastern Cape to pilot this kind of project. If the project is a success there is every chance that it will be rolled out to other areas in the province. Everyone present was singing, sharing traditional songs of praise and rejoicing in the donation of the bicycles. It is worth noting that while the event was happening, delivery of health services to community members continued as normal.

The ceremony concluded with HAST Counsellors visiting homes in Polar Park  – demonstrating exactly how they trace and follow-up with household and close contacts of TB index clients. Thank you!

TB HIV Care · 18 hours ago
@TBHIVCare
DID YOU KNOW: Condoms remain the only single method that prevents both unplanned pregnancies and the transmission of sexually transmitted infections, including HIV.
#didyouknow #condomweek #tbhivcare https://t.co/nqVi356PUo
View on Twitter
0
0

TB HIV Care · 2 days ago
@TBHIVCare
INTERESTING FACT: Condoms have been used since ancient times, documented since the Renaissance. Rubber condoms became available in 1855, followed by latex condoms in 1920s.

TB HIV Care · 3 days ago
@TBHIVCare
There are only 9 days left till the Condomise Dance Competition closing date… The good news is you can still enter the competition to stand a chance to win a R1000 voucher!!!

TB HIV Care · 1 week ago
@TBHIVCare
As we venture into a new year, we can foresee new trends and changes in the medical field with guidance from healthcare experts. To read about these interesting discoveries, follow the link: https://t.co/Fi5Q82xNrC