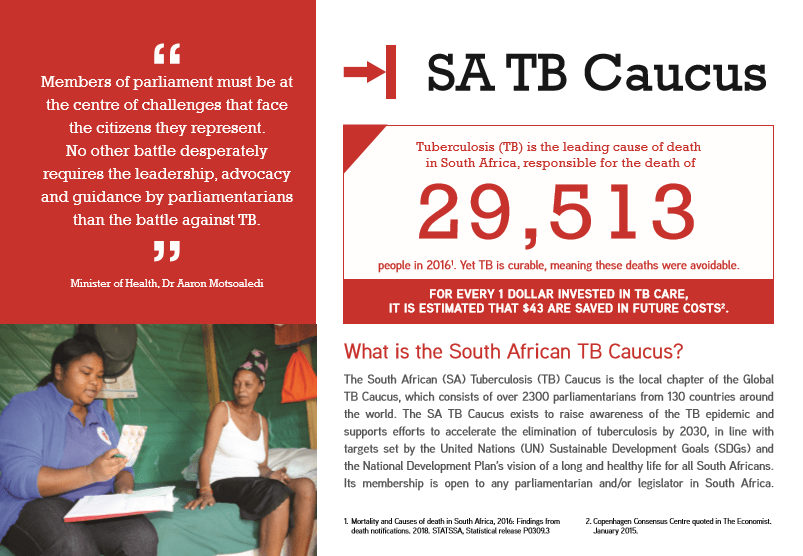 The South African TB Caucus is the local chapter of the Global TB Caucus, which consists of over 2 300 parliamentarians from 130 countries around the world. The SA TB Caucus exists to raise awareness of the TB epidemic and support efforts to accelerate the elimination of TB by 2030 (which is in line with both the UN’s Sustainable Development Goals and South Africa’s National Development Plan’s vision of a long and healthy life for all South Africans).

TB HIV Care is working closely with the  National Department of Health, the University Research Council (URC), the Bill and Melinda Gates Foundation and TB ambassadors (like Gerry Elsdon) to launch the Caucus, host briefings on TB issues and engage with the media to raise awareness of TB – all in the lead up to the United Nations High Level Meeting on TB in September 2018.

The first step is to recruit MPs to join the Caucus, and this took place on Friday 22 June, when the Minister of Health Dr Aaron Motsoaledi, addressed the Speakers Lekgotla at the Radisson Blu Hotel in Sandton.

The purpose of his address was to create awareness on the TB epidemic and, more specifically, the role that Members of Parliament (MPs) can play in the fight against TB.

The meeting was well attended and among the guests were the National Speaker of Parliament, Hon. Baleka Mbete, TB Ambassadors Gerry Elsdon and Thabo Palasane (who both shared moving stories about their experiences with TB), and representatives from the Gates Foundation, USAID and the National Department of Health.

The highlight of the meeting was the story shared by the Deputy Speaker of Parliament, Hon. Lechesa Tsenoli. His very personal story underscored the point that TB does not discriminate –  but most importantly that it can be treated and cured.

The Minister’s address was especially important. As the chairperson of the Global TB Caucus it was imperative for him to inform MPs of their role in addressing the TB epidemic in our country in an effort to encourage them to join the South African TB Caucus.

Once established, the SA TB Caucus will enable South African members of parliament to champion legislation that will create an enabling environment for access to healthcare for TB and for TB research and development. These MPs will also be able to raise awareness of the disease among their constituencies, and provide a mechanism of accountability for government funding and the performance of South African health programmes.

A selected coordinating body of the SA TB Caucus will attend the United Nations High Level Meeting, taking place in September in New York, under the theme “United to end tuberculosis: an urgent global response to a global epidemic”. At this meeting, UN member states will make commitments to accelerate the efforts in ending TB.

All in all the meeting was a great success and TB champions were identified among the parliamentarians in attendance. The MPs appeared very motivated and we can only build on that momentum in creating a lively and robust Caucus.

No Tweets available. Login as Admin to see more details.