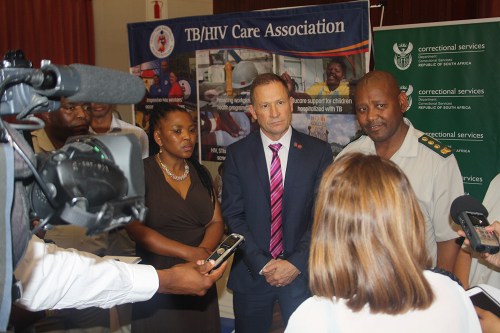 On the 30th March, TB/HIV Care and the Department of Correctional Services (DCS) held an event to highlight and share the successes achieved in the TB/HIV programme in Pollsmoor. The honourable Western Cape Minister of Health, Nomafrench Mbombo, participated in the event; helping to cut the ribbon on a brand new digital X-Ray machine which will assist in finding new cases of TB in prison

Other screening techniques, including the GeneXpert machine which was launched two years ago and can diagnose TB within two hours, have already borne fruit. TB case-finding in Pollsmoor doubled in one year; from 190 diagnosed in 2012 to 405 diagnosed in 2013.

Since then, 68 152 inmates have been screened for TB, 9922 have been tested with the GeneXpert tests and 701 started on TB treatment of whom 28 were started on multidrug resistant TB treatment. If one TB patient infects 20 others, then the rapid diagnosis and treatment of 701 cases of TB may have prevented 14 020 other TB infections in Pollsmoor.

This is of particular importance in the prison setting, where TB prevalence and the risk of transmission is high. Inmates are therefore one of the groups of people South Africa’s National Strategic Plan for HIV, STIs and TB 2012-2016 proposes targeting with interventions. Other groups include people whose immune system is compromised and people who live or work in areas where they are exposed to TB such as inmates and officials in correctional facilities, miners and those living within mining communities. The theme for World TB Day this year in South Africa is ‘Ending South Africa’s TB epidemic: accelerating our response in key populations’. The sub theme is “Find, treat and cure TB in hard-to-reach communities”.

The main aim of Monday’s event was to show how civil society can work in partnership with government to fight the spread of TB in correctional facilities. Through funding from the Global Fund to Fight AIDS, TB and Malaria (Global Fund), the Department of Correctional Services (DCS) and the Department of Health (DOH) in partnership with the National Health Laboratory Service (NHLS) and nongovernmental organisations such as TB/HIV Care Association (TB/HIV Care), Right to Care and the Aurum Institute have implemented a TB screening service in correctional facilities throughout the country.

TB/HIV Care is responsible for supporting 91 correctional facilities throughout the Western Cape, Eastern Cape and in two management areas of KwaZulu-Natal.